This is the fifth post in the series about integrating sync clients with async systems (1, 2, 3, 4). Here we'll see how to manage the actor's lifecycle, so our service can use the available resources efficiently.

Actors, threads, objects, resources... All of them have different states during their lifetime. Some of those states are internal and they shape the entity's behaviour when receiving an external stimulus. However there are state transitions that should be handled by external entities: creation, error recovery and disposal.

A long time ago dependency injection showed us that an object should not be in charge of creating its dependencies. Externalising those concerns into a factory makes code more testable, loosely coupled and readable. We'll need different creation strategies irrespective of the use of DI frameworks or poor man's dependency injection. Guice Scopes is a good example about how to create one instance per application (@Singleton) or one per scope (@SessionScoped and @RequestScoped).

Often system resources are scarce, expensive to create or they're under heavy load. That means that we can't afford neither a Singleton nor an unbounded creation strategy like Prototype in Spring. A good example is thread pools.

Akka Actors are extremely lightweight. We could afford creating millions of them if we knew that they would be disposed quickly. However that's not the case with our use case: 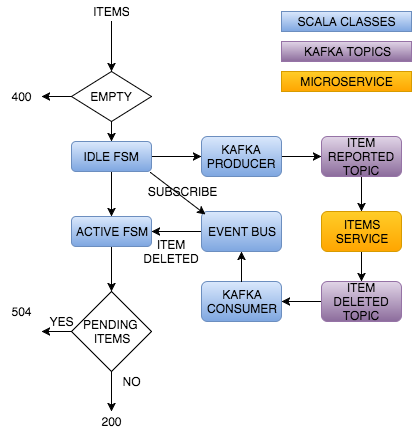 As you can see Finite State Machine (FSM) actors will wait until the Items service finishes deleting the items. It's important to note that the actor is waiting, but not blocking. Actors are attached to Dispatchers that have a Thread Pool inside. Those thread pools have a limited number of threads; blocking one of the actors would mean running out of threads pretty quickly. In this particular example we want to bound the number of actors, not threads. Maybe it is overkill, but the point of this series is mainly educational. Let's see a diagram of our service with the proper level of abstraction.

Akka HTTP is a library based on Spray to create HTTP integration layers. Akka HTTP offers a routing DSL extremely powerful and easy to read as you can see in our code:

In this snippet I'd like to stress out ask vs tell pattern. Just to clarify, these are Akka patterns, nothing to do with the amazing Tell, don't ask principle. The tell pattern involves firing a message and forgetting about the response. In this approach information flows in one direction. However for our scenario we're interested in the ask pattern. When we send a message to an actor through ask pattern a future is created with an eventual response bounded by a timeout. As the documentation says:

Using ask will send a message to the receiving Actor as with tell, and the receiving actor must reply with sender() ! reply in order to complete the returned Future with a value. The ask operation involves creating an internal actor for handling this reply, which needs to have a timeout after which it is destroyed in order not to leak resources; see more below.

The FSM needs a reference into the coordinator, as it's responsible for managing the lifecycle of the FSMs. Coordinator sends a message to the FSM telling to flush its internal state. At the same time puts back the FSM into the pool.

Remember how the FSM notifies that its work has finished:

replyTo is a variable that was initialised with sender() when receiving the first ItemReported message. Remember that the message was forwarded so the sender is the Route Actor. coordinator is an ActorRef that has been injected when the actor was created. We're using poor man's dependency injection for that purpose. Let's see the definition of our actor factory:

This factory will be called n times (depending on the size of the pool) when creating the Actor Pool.

Our coordinator is in charge of the pool and what to do when the FSM finishes in an expected way. However we didn't talk about what happens when our actor fails. Akka has a built-in mechanism for dealing with failures called supervision. There are different recovery strategies, we'll go for the Restart strategy:

As the Restart strategy documentation says:

Discards the old Actor instance and replaces it with a new one, then resumes message processing.

This strategy has been defined in the coordinator. How can we specify that this coordinator is the parent of the FSM to be supervised? Remember how we created the FSM:

Create new actor as the child actor of this context

itemFSMFactory is called in the scope of the coordinator. Every single actor has a context that includes the sender, self and different meta objects. Creating an actor using coordinator's context binds those actors as parent-child.

Thanks to Akka constructs and patterns, and the functional and async goodies of Scala we could write coordination code quite easily. In the next post we'll se how to test Akka.

Thank you for your time, feel free to send your queries and comments to felipefzdz.