A function is a black box that given an input always gives you back the same output. As we stated before, a function does not have any side effects; if it has any, it could be a procedure but not a function. Function is a term that comes from Mathematics and there is no concept of side effect in there. A function accepts a set of input values; we call that the domain of a function. The output of a function is called codomain and the set of outputs is called the image of the function. We can decompose them like this:

Where A is the domain and B is the codomain. For example, for the function f(x) = 2x we can decompose it as it follows: 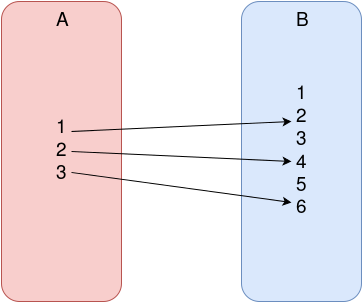 Function composition is one of the bases of functional programming. The idea is that if you have a function f = A->B and a function g = B->C you can create a 3rd function h = A->C which internally uses f and g to create that C, that is: h = g(f(x)). If we express it in mathematical terms we can say that h = f∘g readed as "h is equal to f after g" or what is the same: h = Cgf An example of function composition is:

We declared two functions intToString and stringToDouble, when we compose them we create a 3rd function which accepts an int and returns an double. So if we call it: composedFunction("32") it returns 32.0 which is the result after converting that String to int, and from that int to a Double. Notice that when composing functions, the functions are applied from right to left, this time: intToString and then stringToDouble. We can do the same without modifying the order of the functions with the function andThen, this will be like this:

This is the same and in my opinion less confusing. This last expression could be stated without infix operators as it follows:

As you can see, the function i => i + 1 is passed in as an argument of the map function.

Partial application means that for a function that accepts a number of arguments, N, we can fix or bind some of its arguments that it takes to reduce the arity of the function. Consider these two functions:

Notice that sumOfOne partially applies the function sum reducing its arity to 1. This is super useful and if you take a look on the internet you will see some people using this technique as a replacement for dependency injection.

Currying is a technique that allows us to decompose a function with arity N (where N is > 1) in a chain of calls to smaller functions with arity 1. Let's see an example:

Now sumCurried returns a function which returns another function and that last one calculates the result. Doing that we reduced the arity of sum to 1 expressing it as a smaller function. Scala can automatically curry a function using the curried function, an example of the previous version of sum:

This is a sample curry implementation:

So, what is the difference between curry and partial application? As we stated before:

This is an example of how to apply currying to a binary function:

This is an example of how to partially apply a curried function:

There is a small difference, but is important to understand it.