Cohesion - The cornerstone of Software Design

Cohesion is one of the most important concepts in software design. Cohesion is at the core of the vast majority of good design principles and patterns out there, guiding separation of concerns and maintainability. The term cohesion (alongside coupling) was first introduced by Larry Constantine in the late 60s as part of Structured Design and later published in more details by W. Stevens, G. Myers, and L. Constantine in 1974. Due to the growing complexity and cost of software back in the 60s, 70s, and 80s, loads of studies and research around software design and maintainability were done. Although we can still find some of these papers and research online today, they were done in a pre-Internet era and most of the work done during that period is either lost or not easily available.

But before we dive into the details, let’s see some definitions.

Cohesion (noun) : when the members of a group or society are united. Cohesive (adjective) : united and working together effectively.

In computer programming, cohesion is a measure of how strongly related and focused the various responsibilities of a software module are.

Cohesion is a sliding scale metric

A common mistake is to treat cohesion as a binary attribute instead of a sliding scale. In the original work by Stevens, Myers, and Constantine in the early 70s, they defined seven levels of cohesion, which later became known as SMC Cohesion.

If we adapt some of the ideas published by Meilir Page-Jones on The Practical Guide To Structured System Design (1980), we could have a guideline to identify levels of cohesion. 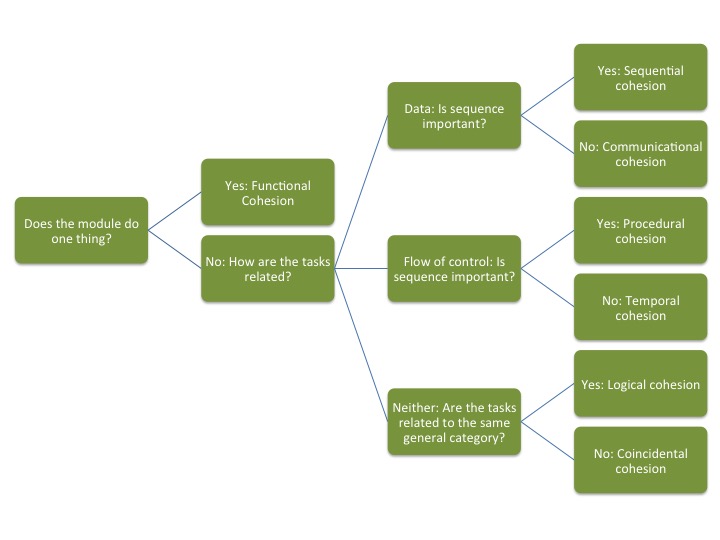 The SMC Cohesion model was a great step forward in the 70s and many software professionals and academics tried to create software metrics that could measure degrees of cohesion so that they could design their systems in a way that they were more maintainable. The problem with the SMC Cohesion model (levels) is that it can be quite subjective and requires personal judgement. I can think of a few code examples that could fit in more than one level of cohesion in the SMC Cohesion scale. If we start digging into the details of the examples I gave above you will see how easy you will be in doubt about which level the example belong. Because of its subjectiveness, SMC Cohesion could not be used efficiently to derive reliable metrics.

Many papers and a few books were published from late 70s to late 90s exploring and expanding the notion of cohesion and coupling defined by SMC Cohesion. One model that got some acceptance was the Design-Level Cohesion (DLC) Measure. DLC is very similar to SMC but with only 6 levels and a small variation in definition and names. The main advantage of DLC is that it is more suitable for deriving metrics tools.

Before we dive into the DLC levels, let’s define a vocabulary:

Here are the DLC levels:

These six relations are in ordinal scale where R1 is the weakest for of cohesion and R6 the strongest. In DLC Measure Definition, the cohesion level is determined by the relationship between outputs of a module and processing elements. 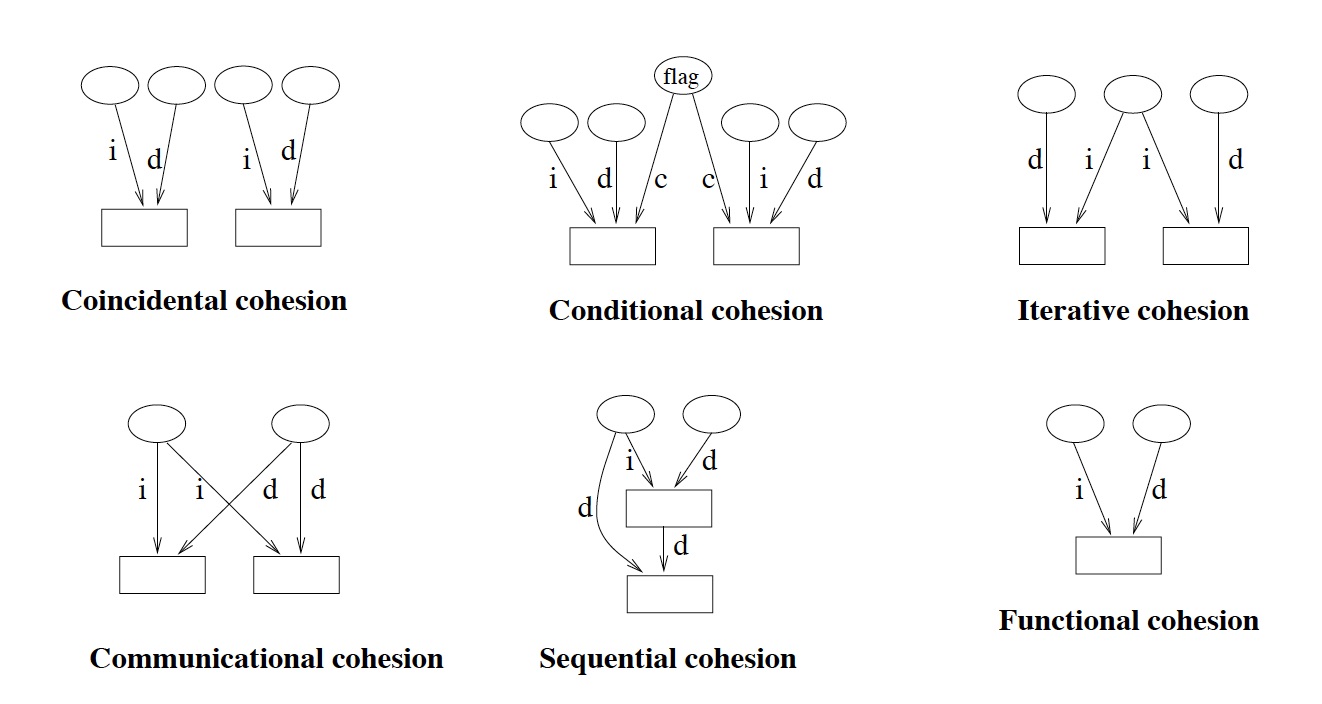 And here is how SMC and DLC relate to each other: 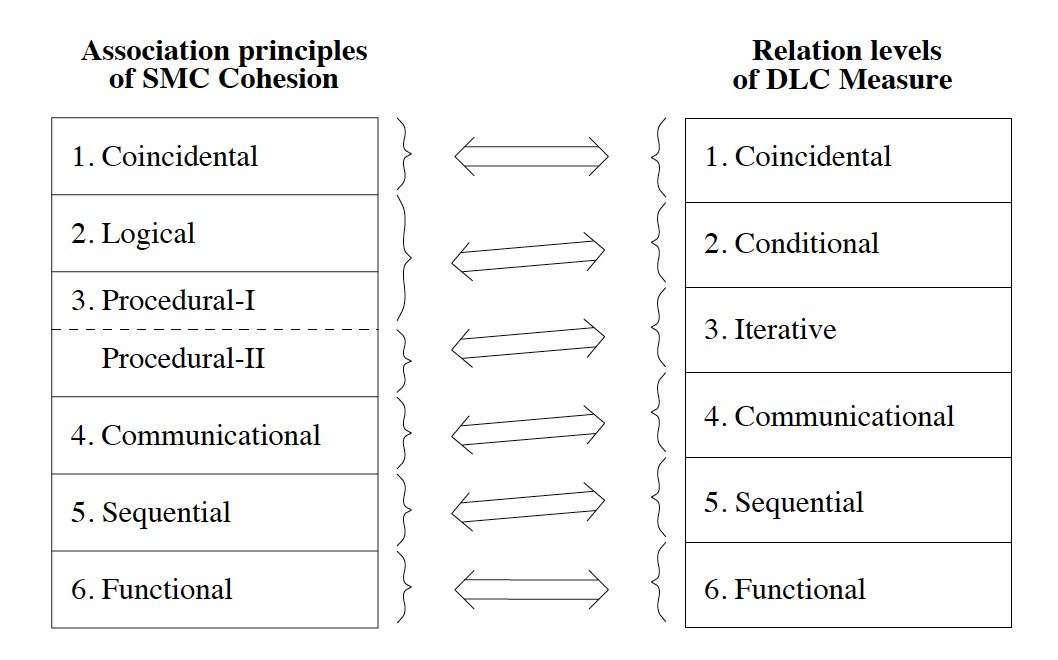 Depending on the type of software you are writing, you will may need to compromise a bit. Although we should always strive to have our code at the highest level of cohesion, sometimes that may make the code look unnatural. There is a difference between being unaware of design principles and consciously not following a design principle in a given context. I don't write my code with the goal that it should satisfy every single design principle out there but I always try to have a good reason every time I decide not to follow certain principles. Having said that, cohesion is one of the most important building blocks of software design and understanding it well is essential for writing well-crafted code.

Some people compare cohesion to the Single Responsibility Principle (SRP). Although SRP is a great software principle and entirely based on cohesion, it has a quite narrow and subjective scope.

Identifying responsibilities is not always an easy thing. We need to develop a keen eye to detect minor variations in behaviour. Unit tests for a module can potentially help us to identify the different behaviours, if the code was really test-driven, of course.

The more cohesive your code is, the more reusable, robust and easy to maintain it will be.